Gorge Narrows Rowing Club gives thanks to the Lekwungen-speaking (Le-KWUNG-en) People of the Songhees and Esquimalt Nations, whose traditional lands and waterways we share daily.

Rowing on the Gorge 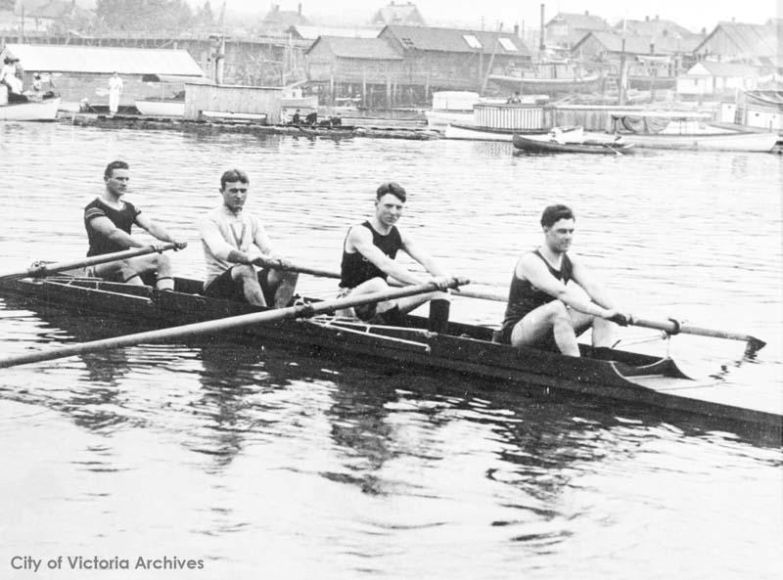 People have been using the Gorge Waterway for commerce, ceremony, sport, and recreation for thousands of years. Halkett (Deadman's) Island, just in front of our club, belongs to the Songhees Nation and is an ancient burial site.

Rowing, as our club practices it today, became established in Victoria during the 1800s.

Many of the settlers who flooded into Victoria at the time, as well as officers at the Royal Navy Base in Esquimalt, were Englishmen familiar with British rowing tradition. Races on the Gorge and the Inner Harbour attracted hundreds of spectators. These rowing events were as much social gatherings as sporting events in the 1800s.

Our club's roots started in 1996 with the Go Rowing & Paddling Association of Canada. Under the umbrella of GO, our site offered paddling, rowing, and fitness opportunities for Greater Victoria.

Around 2014, GO transferred the community rowing program to St. Michaels University School. At the same time, Fairway Gorge Paddling Club was formed to take over the paddling and gym facilities (the gym now operates independently as Selkirk Waterfront Fitness).

In 2017, the Gorge Narrows Rowing Club became independent from SMUS and has been running community rowing programs ever since. Both GNRC and SMUS run rowing programs out of the boathouse. 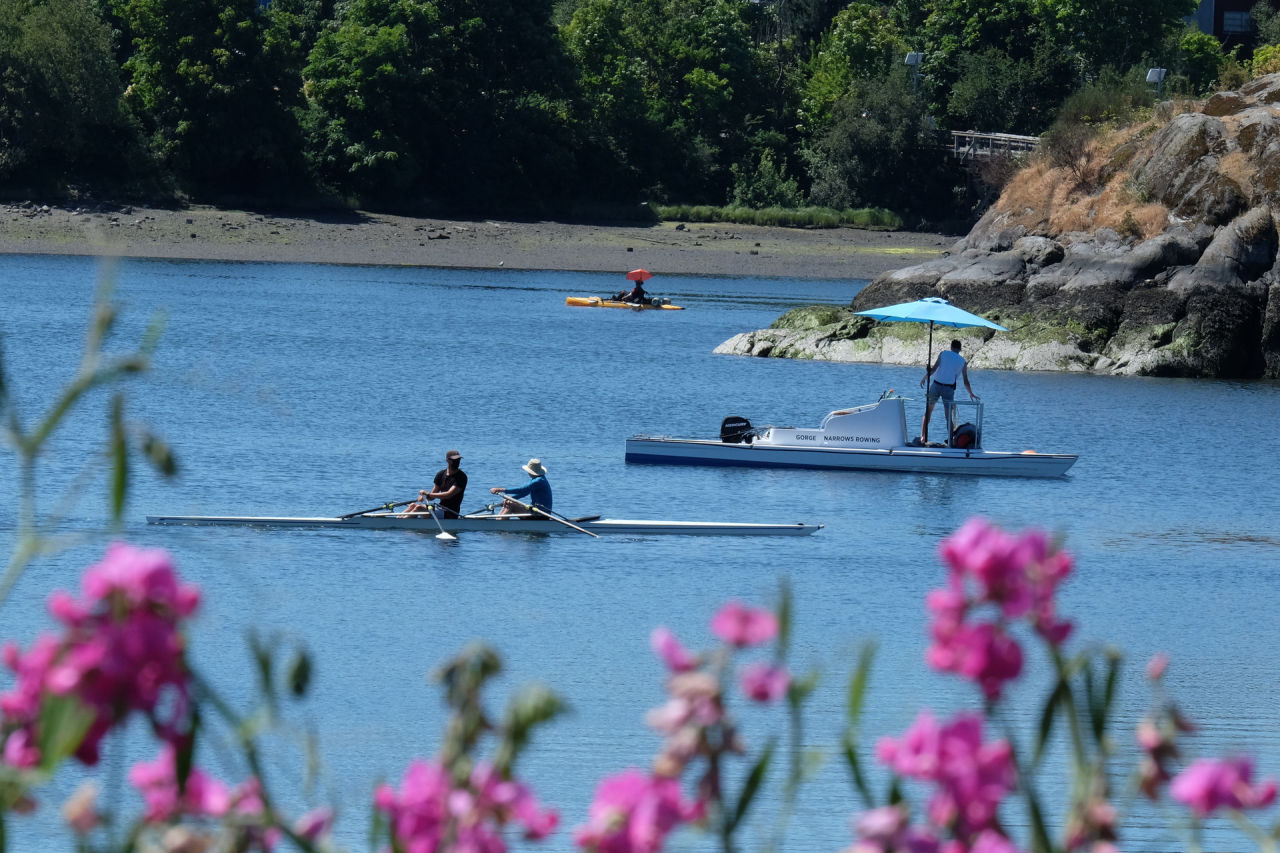 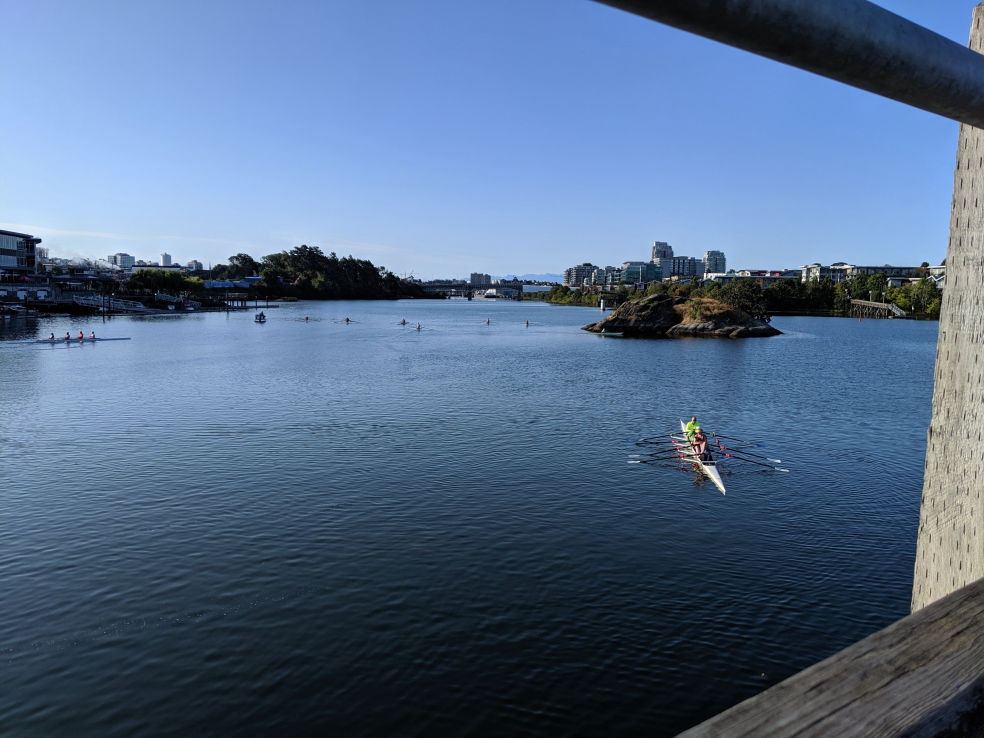 Just in front of the club dock is Halkett Island, which is an ancient burial site of the Songhees Nation.

A plaque placed on the shore near the island by the City of Victoria says:

In 1850, the "Island of the Dead" contained subsurface burials, but was mostly covered with small sheds, burial boxes and canoes containing human remains. The deceased were often placed in a fetal position and wrapped in a cedar bark mat. Adults were placed in a European-made, metal trimmed trunk and children were often placed in wooden cracker boxes.

The Lekwungen people, from the old Songhees reserve across the water, came to the island at twilight for feeding of the dead ceremonies. Sticks with chunks of sap were thrown into a fire to keep it blazing until midnight. Ritual words and chanting proceeded, as food to feed the dead was thrown into the fire.

Burials were no longer placed here after 1867, when a fire set by three Victoria boys got out of control and burned off the island. The boys' parents were heavily fined under the Indian Graves Protection Act. The island was taken away from the Songhees in 1924 by a Federal Indian Reserve Commission, but was restored to them by court order in 1993.

Joseph Pemberton, Victoria's most prolific early map maker, gave the name Halkett to the island in 1851. The Halketts were a well known, prominent British Navy family at the time.

The Selkirk Trestle was built by the Canadian National Railway in 1903. Today, it is part of the Galloping Goose Regional Trail, which runs for 55 km from the City of Victoria to Sooke on the west coast of Vancouver Island.

Since the trail runs right past our dock, it's a great way to get to the club, as it is an integral part of the region's active transportation network. 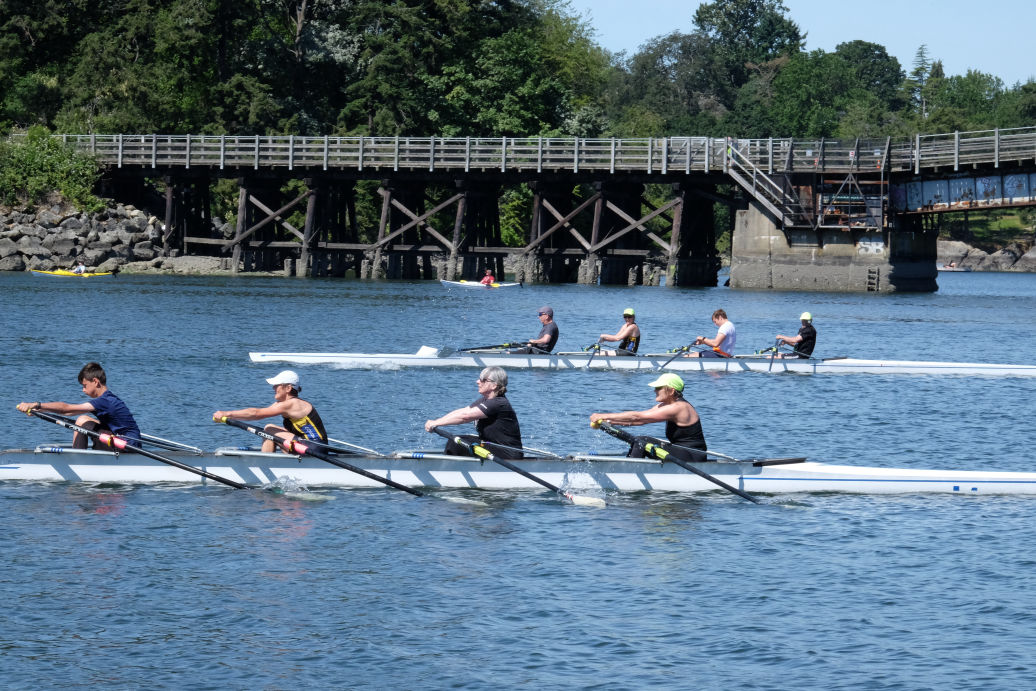 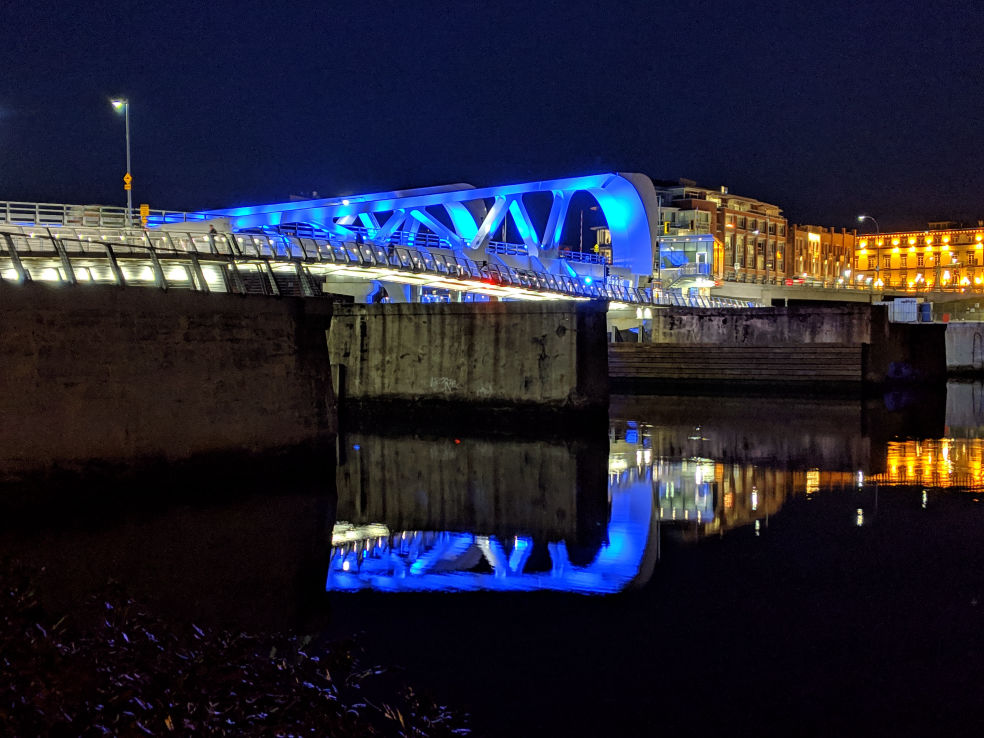 The Johnson Street Bridge is the fourth bridge to span the Gorge Waterway into downtown Victoria. The Victoria Bridge was built for wagons in 1855. Unfortunately, it blocked boat access to the Inner Harbour and was replaced just seven years later, in 1862, by a ferry service.

The ferry service lasted until 1888, when the Esquimalt & Nanaimo Railway (E&N) built a swing bridge. The swing bridge served for 35 years, but was limited to people walking and trains. It was replaced in 1923 by the first Johnson Street Bridge, a drawbridge.

For it's first fifty-five years the Johnson Street Bridge was actually painted black! It was repainted in 1979 after a significant repair, and so the "Blue Bridge" was born.

The current Johnson Street Bridge went into service in 2018. While the bridge is actually grey, it is lit a spectacular blue at night!

The pedestrian pathways on both sides of the new bridge are great places to watch the Brown Cup!

Racing on the Gorge

The Brown Cup race between UVic and UBC has been one of the iconic rowing races here in Victoria since it's start in 1992. The race has been run on both the Gorge Waterway in Victoria and the Fraser River in Richmond. 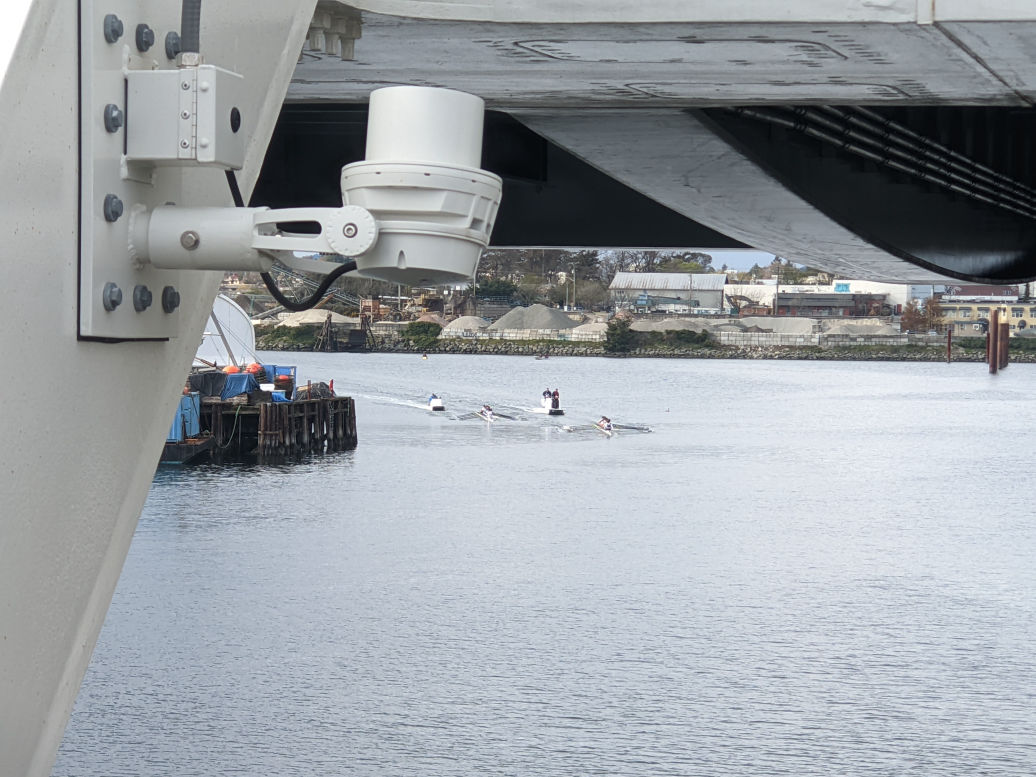 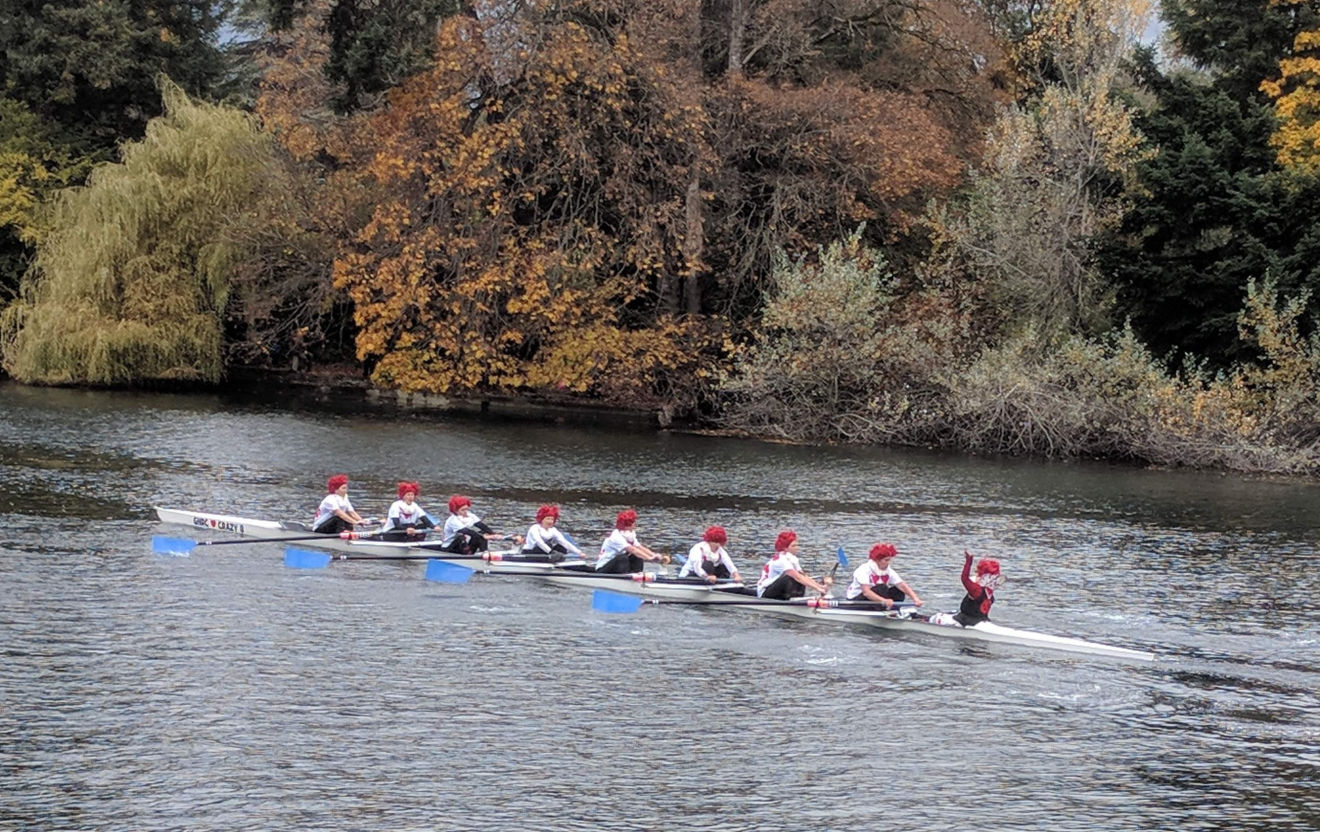 The Head and Tail of the Gorge Regattas are an iconic BC event, and mark the end of the Cascadia rowing season. As such, it draws rowers and spectators from across BC, Alberta, and the Pacific North West.

Since 1978, the Head and Tail of the Gorge Regattas have offered great racing during the day, and the hospitality of Victoria at night. The Head of the Gorge encourages rowers to wear Halloween costumes during the race, and that gives the entire event a festival atmosphere!

The Head and Tail of the Gorge were hosted by the University of Victoria Vikes men's and women's rowing programs from 1978 through 2021. Starting in 2022, the events are being hosted by the Gorge Narrows Rowing Club, with support from the Greater Victoria rowing community.